Archives For Why People Quit 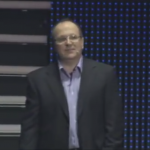 Have you or someone you know ever Quit on their dreams. The bad news is the No1 Reason that such a large majority of the population never get to do the things they dreamed of is because of these things below. The good news is when you have worked out some of these reasons you will then be in a better position to finally succeed at making more of your dreams come true. 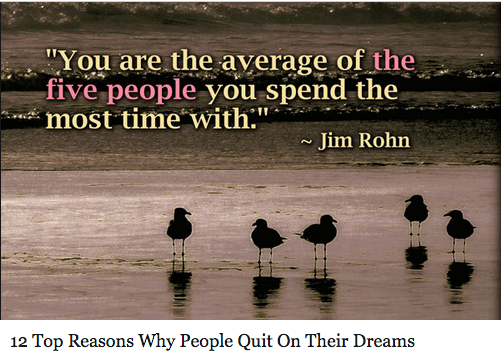 1. Belief – Many people quit on their dream because they lack belief. Imagine starting a successful business or enterprise you are selling a great product or service.  But you think it totally sucks!!  In a lot of cases people will see your enthusiasm about the product or service or lack of and run a mile.  On the other hand if you believe you will never achieve any success.  The universe will set you up to achieve exactly what you want.

This is probably the biggest dream stealer out there. Most people  have a far of the unknown, so they like to stay in their comfort zone.  I once spoke to a taxi driver and I mentioned a meal with rice.  He said to me ooohhh rice I wouldn’t touch that foreign stuff.  The poor guy has probably lived on sausages and mashed potatoes his whole life.   And his mother or granny has probably convinced him there is something wrong with foreign food.  That fear has kept him living in the same town. Eating the same food, doing the same things daily for 60 years of his life.

The same reason applies to many people not starting a business, not expanding their business.  Afraid of taking a loan to expand the business scared of setting up a second business doing something different than what they are used to.

The great thing about excuses is that you can always give yourself multiple reasons for failure.  In fact it can shift responsibility from you to something completely unrelated.  It doesn’t really but for the quitters it looks to them like a get out clause.

4. Laziness – Let’s face it some of us can just be lazy sometimes, yes there are in fact people who would happily just lie on the beach all day every day and sunbathe.  Making money or providing an above average lifestyle for themselves or their family is not a priority.  Why?  Because they just cannot be bothered.    Many truly lazy people will have a mixture of laziness and excuses to protect them from making any real effort at anything.

An example of a lazy persons statement would be.  You can’t take it with you when you are gone or rich people aren’t happy.  Or the sun will only be out for another two weeks so I am going to lie in it while it is here.  Then when the sun  goes they will probably have a TV series to catch up on.

5. Lack Of Effort -There is something required when you start any business and the same should be done for an online business as well, lot’s of online businesses fail it comes down to a lack of effort in many cases.  The thing is that because people see online marketers making a lot of money online while they are doing something else.  It gives them the idea that they can pay a few dollars or a few thousand dollars and then do nothing and wait for the money to roll in.    Unfortunately that is not true at the beginning until you build up some business you need to either grind or do some work to get your business of the ground.  Or else you can pay someone else to do the work for you, the truth is you cannot join an online business do nothing and expect the money to start rolling in. So in the beginning you need to get up and do some marketing, provide some value to your customers in the form of content, goods  or services before people will start paying money to be a part of your business.

6. Not Motivated – Not being motivated could roll in to our last paragraph talking about a lack of effort, but really non motivation can kill your business instantly. Imagine going in to a car dealership to buy your favourite car and the salesman starts telling you all the things that can and do go wrong with it. It won’t exactly make his sales go through the roof the same goes for your business.  If you are not motivated about what you do?  If you don’t believe your product or service works and provides any benefit neither will your customers.

So whatever you are selling get excited about it or change it for something that you can get excited about if you want to have any success in the business.  Energy sells when you have high enthusiasm your energy will radiate from you and attract other high energy enthusiastic people. When your energy is low you will attract the low energy vampires the choice of course is yours.

7. The Entitlement Mentality –  This is a scary one when I hear this word I start to cringe.  Even the word entitlement to me spells out victim looking something or someone to blame or lack of responsibility.  In our society people have become programmed to live with this entitlement mentality. Some examples of this would be .

a.I am unemployed and I am entitled to get £63.41 per week from the government where do I line up.

b. I am going to work for my job for 40 years so my boss is responsible for my money and pension and if he closes down his business or fires me I can blame him.

c. I worked all my life and paid my taxes and now my pension is not enough to live on.

d. Here is some extra benefits, child benefit, working tax credit, child tax credit what an easy way for government and private corporations to inject fake money into the monetary system and charge interest on fake money typed out digits on a computer while creating an entitlement mentality at the same time.

8. The lottery mentality – The lottery mentality is easy to figure out the way it works is kinda like flipping a coin in the air and seeing what happens. Millions of people daily take a punt or a gamble and pay to join some online business in the hope they will get a fortune in return for doing so.

The truth of the matter is yes you can do the lotto and hope your 400,000,000 to 1 number comes up but you are not exactly stacking the odds in your favour. In fact one business which I have had lots of success in is a blogging business but unfortunately the truth is I have had many people pay $25 or $45  to join that blogging business and never create their first blog post. With the hope of making a million dollars by doing absolutely nothing or very little.

9. They don’t like it – This is another one to watch out for, many people join a  business which they don’t like.  This tends to have a few effects on their business some of them being the lack of enthusiasm pointed out earlier in this post. Or just having a lack of energy or drive to get things done because they do not like what they are doing.

In fact if you look at any person family or business you will see they all can look like a pyramid.  Does that make everything a scam?  I don’t think so.

11. The people they associate with –  Did you know that your income  will normally  be the average of the 5 people you associate with the most.  So associating with the right type of people is a huge clue if you are wanting to increase your Net Worth.  So if you want to fly up high with the eagles it isn’t a good idea to hang about with the Turkeys.   So if you want to become a millionaire start hanging around with millionaires.  If you want to be a Billionaire then you should be hanging out with other Billionaires.  If you want to become a broke working class alcoholic then spend your weekend in the pub drinking with your broke fellow employees who also have a drink problem.

Recently I was talking to one person who was working on my team, he left the country and was starting to get results in his business.  Unfortunately since he moved he contacted me to tell me that he was hanging around with a bad crowd and unfortunately his results started dipping.  In fact all he would have needed to do would be surround himself with successful people who are already making money in their business and his income and results would transform.  So be careful who you hang around with!!

12. I am not smart enough mentality-  Sounds like another excuse to me but the truth is I do and have seen multiple examples of people who believed this in fact one of my best friends in school used to say this to me all the time.  He used to say I am stupid or I am too dumb when talking about himself because that is what his parents always told him.  The truth is he grew up believing that he wasn’t smart enough to start a business or have any success.  So he settled for an extremely boring 9 To 5 Job and spent the last 20 Years complaining about his job and not having enough money.  Yes the truth is his parents and his own self proclaimation came true because he believed in it.  So the moral of the story is before you judge yourself or tell yourself a bad story think about the damage you could be doing to yourself and future generations of children.